skip to main | skip to sidebar

Self Portrait in a Cold Studio 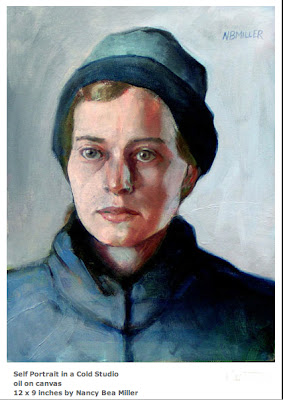 I was just blogging on another blog about an artist who painted herself beautifully in a freezing studio and I was reminded of my own self-portrait from (I think) 2004 or 2005, "Self Portrait in a Cold Studio."Even though my studio is in my house, it's a chilly place. For some reason the radiator has never worked well, and the windows (on two sides) are drafty. In the dead of winter I often work while wearing a hat and puffy down vest, as pictured, as well as long underwear under my heavy clothing and fingerless gloves (not pictured.)  Even so I need lots of cups of hot tea to keep me going! This annual inconvenience makes me feel all hardy and suffering-nobly-for-my-art-ish.  ;-)

This painting "Self Portrait in a Cold Studio" has been exhibited several times in various venues including the Philadelphia Sketch Club, and still lives online on the Robert Genn website.
Posted by Nancy Bea Miller at 8:58 AM 1 comment:

I'm right now in a group still life exhibition at Artists' House Gallery in Philadelphia, PA. The gallery director there, Lorraine Riesenbach,  has been wonderful about including me in several group shows despite the fact that I am essentially on leave of absence from most of my other work obligations due to being in graduate school.  Although participating in the shows is a bit of a strain, one more flying ball in my very large juggling act, it's probably a very good thing not to lose the showing momentum.  Participating in showing work keeps you grounded in reality...and reality sometimes feels a very long way away from graduate school..land of theory! ;-) So I am grateful to her for her persistence and patience with me.
Here are the pieces in Beyond the Ordinary:

Beyond the Ordinary Still Life

Posted by Nancy Bea Miller at 4:54 AM No comments:

Illustration Friday is running a them that gets my heart pumping: midsummer night! How I long to be visiting the far northern reaches of Scandinavia one midsummer's day eve! Till then, Maine is about as north as I can get. This is the moon rising over the tip of Monhegan Island.
Posted by Nancy Bea Miller at 2:40 PM 10 comments:

This week's prompt over at Illustration Friday is shadows. A good deal of this painting is about the shadows cast by the objects. So I hope it fits the bill. This piece was part of my one person show last month at Artists' House Gallery in Philadelphia. I believe the paint was still wet when I dropped it off. I hope I canpry it out of the frame because of course I now see several things I'd like to fix!

Bicycle is the theme today at Illustration Friday. I have only once painted a bicycle, and here it is! It's very uncharacteristic in style as well as in execution. I was so worried about depicting the bicycle accurately that I traced it carefully in pencil onto the primed canvas before "coloring it in", not at all my usual slap-happy style!

I had been showing at a gallery in Portland Maine (Susan Maasch Fine Art) and was dropping off some work one late afternoon when I saw this bicycle delivery guy sailing slowly past on his red bike. There was something about the light and the balanced motion of the scene that caught at my heart. I happened to have my camera in hand and click: almost unbelieveably I managed to catch the moment. I don't usually work from photos, depict action, work from tracing or even do any drawing at all before painting, but I did this time and was somewhat pleased with the result. Something to revisit in future perhaps.

I felt later, looking at the scene that it had a faint whiff of Christen Købke about it, which must have unconsciously caused the initial attraction. I have had a postcard of this painting on my studio wall for years.
Posted by Nancy Bea Miller at 5:36 PM 6 comments:

Bottled is this week's prompt at Illustration Friday. I love this little brown bottle which once held a nutritional supplement we were giving my son with autism when he was younger,  and I use it over and over again in my work. I think it signifies a simpler time, when we were full of hope and energy. Still have lots of hope, but less energy! ;-)  The coreopsis blossom and nasturtium leaves were from my late autumn garden. They lasted a long time in my chilly studio. The apple on the left only went into the compost bin a month or two ago...very long-lasting! This recently completed piece is on the invitation card for my upcoming show:

DUET is this week's prompt at Illustration Friday. This is a painting I completed about a month ago and I think it fits the bill. I am in the Philly area and we sure do love our soft pretzels here! I am originally from NYC and we loved our pretzels there too, but the NYC pretzels are an entirely different configuration. In any shape, soft pretzels are best bought from a street vendor on a cold day,  eaten warm with a zigzag of mustard. If you get a blob of mustard on your cheek and someone kisses it off...all the better!
Posted by Nancy Bea Miller at 9:27 PM 15 comments:

My Other Web Stuff